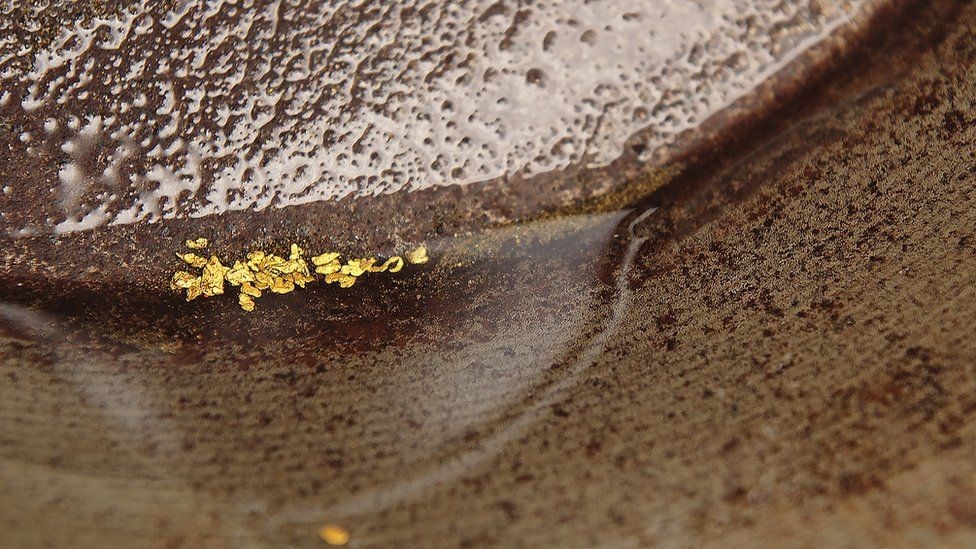 Is there ‘Gold in them there hills’ in the UK? Has there ever been?

If panning for gold makes you think of pioneers in wagons ‘way back’ in America, then think again -actually its also right here in modern day Britain.

Gold has been found in the UK for thousands of years – and was a key reason behind the Roman Empire expanding to Britain.

Though large scale gold mining in the UK has all but ceased, hobbyists across the country regularly hunt for gold. You can buy gold panning equipment online in British stores – and yes, on Amazon!

You can even join the British Gold Panning Association and compete with fellow enthusiasts.

Gold can be, and has been, found in all corners of the UK.

In England it has turned up in the Lake District, the Pennines, the Forest of Dean and Cornwall.

In Scotland it is found mostly in Dumfries and Galloway. There is a new project in planning to mine gold on a large commercial scale in Scotland – see map for the gold ‘hot spots’.

Wales has the Dolgellau Gold Belt in Snowdonia, and the ancient gold mines in Carmarthenshire offer visitors a chance to pan under supervision, and gold is also found the north-east of Anglesey.

Republic of Ireland has County Wicklow’s ‘Gold Mines River’ – the name somewhat giving it away there -and is incredibly popular with would-be prospectors.

ON a side note; silver has also been mined commercially in the UK, one mine on the island of Sark produced more than 25,000 ounces of silver:

In May 2019 a gold hunter found the UK’s largest gold nugget – in a Scottish river.

The gold hunter was ‘sniping’ – a method of gold hunters that see them lying face down in a river whilst wearing a snorkel and dry suit.

The previous largest UK gold find was in 2016, weighing 85.7g. Called the Douglas Nugget it was also found in a Scottish river.

We’d like to point you in the direction of our GOLD page here at Almagrove, should you be fortunate enough to find any yourself!

Almagrove Private Asset Finance is a trading name of Almagrove Ltd, which is authorised and regulated by the Financial Conduct Authority (FCA), in relation to personal asset lending and credit broking under firm reference number 740196. It is incorporated in England and Wales (registration number 03000668) with its registered office at 2-8 Parkstone Rd, Poole, Dorset BH15 2PW